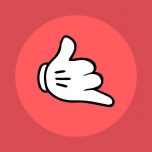 Rock–paper–scissors (also known as scissors–rock–paper or other variants) is a hand game usually played between two people, in which each player simultaneously forms one of three shapes with an outstretched hand. These shapes are "rock" (a closed fist), "paper" (a flat hand), and "scissors" (a fist with the index finger and middle finger extended, forming a V). "Scissors" is identical to the two-fingered V sign (also indicating "victory" or "peace") except that it is pointed horizontally instead of being held upright in the air. A simultaneous, zero-sum game, it has only two possible outcomes: a draw, or a win for one player and a loss for the other.

Bot shows new interesting games for Android I'm AndroidGamerBot! I'll show you the best games and apps for Android! If you'd like games, you can rate me here: https://telegram.me/storebot?start=androidgamerbot

Stranded in deep space after running out of fuel, you luck upon a nearby space station. When you get there, though, the place is abandoned, and strange things seem to have been happening lately. And if you can make your way off the station and reach the planet below, that's when things get really strange.

This game is known as Bulls and Cows worldwide (see link for details https://en.wikipedia.org/wiki/Bulls_and_Cows).
This game is also known as a Baseball Number game or Puzzle Strike via TV shows in Korea.
Below webpage is the instructions and rules for playing this game.
http://php-webping.rhcloud.com/psbot/

(59 433)
Add to
This site uses cookies to store data. By continuing to use the site, you are giving your consent to work with these files.